Jackie Robinson: My First Symbol of Racial Pride in Sports 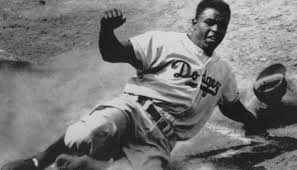 The inclement weather ten days ago on Sunday, April 15, tried to put a damper on Major League Baseball’s Jackie Robinson Day celebrations.  All Major League players wore number “42”, Jackie’s number, on their uniforms during games that day and other activities were also held at Major League ballparks to honor him.  This year marked the 71st anniversary of April 15, 1947, the day Jackie Robinson became the first African-American in the 20th Century to play Major League baseball.  The weather this spring forgot it is supposed to be the beginning of baseball season.  Six of the scheduled sixteen games on April 15 were cancelled due to cold, wet weather, even snow.  In addition, four of the games played were in weather conditions more conducive for football.  But recognition of Jackie Robinson’s place in baseball history cannot be damped by bad weather.

Why did I delay my Jackie Robinson Day blog post this year?  My past April 15th blog posts on Robinson focused on recapping the game he played in a Brooklyn Dodger uniform on that April 15 at Ebbets Field against the Boston Braves, and highlighting the statistical success of his ten-year Hall of Fame Major League career.  However, this year instead of rushing to just write anything about Robinson to put on the blog April 15th, I did more reflecting and have made a more personal post.

I missed Jackie Robinson’s time in baseball.  My love for the sport began at the end of his career.  He made history on that April 15 day four years before I opened my eyes for the first time.  I know my father and older brothers watched Robinson in action on our family’s first television, a black and white Philco, but I cannot recall as a toddler or   small child seeing him on the screen.  My first TV World Series recollection is Henry Aaron and the Milwaukee Braves’ defeat of the New York Yankees in 1957.  Robinson had retired after the end of the 1956 season.  But from what the adults in my family said about him, I had my first lesson of racial pride in regards to sports.  At six years old I knew of Jackie Robinson as the first “Negro” to play in the Major Leagues.

I know historically that is not true. William Edward White (pictured below left), a former slave, played first base one game for the Providence Grays in 1879.  The Grays at that time were in the National League.  White has the distinction of being the first African-American to play in the Major Leagues.  In addition Moses Fleetwood Walker (pictured below right) in 1884 played with the Toledo Blue Stockings of the American Association, considered a Major League at that time.  However, by 1890 the color line barring African-Americans and dark-skinned Hispanics from professional baseball in America became solid until 1947 when Robinson erased it.  To the adults in my family, the first Negro they saw in their lifetime play in the Major Leagues; Jackie Robinson.  White and Walker were long before their time. 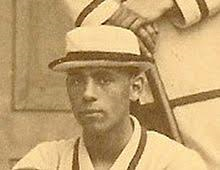 As “baby boomers”, my friends and I idolized players such as Aaron, Willie Mays, Ernie Banks, Frank Robinson, Orlando Cepeda and others whose careers began in the late 1950s.   And in the early 1960s, Billy Williams, Willie Stargell, other African-American, and dark-skinned Hispanic players came on the scene.  We collected their baseball cards, knew all of their statistics, and had our favorite players.  As much as I admired those other ball players, however; I held Jackie Robinson in a higher esteem.

By the time I reached high school in the mid to late 1960s, some of Robinson’s political actions and opinions were contrary to that of many African Americans.  He came under stern criticism from my generation at that time.  Even though the raised fist and shouts of “black power” drowned out Robinson’s more practical approach to racial relations, I did not lose respect for him.  I still saw Jackie Robinson as that first symbol of racial pride in sports I learned as a child.

I love seeing the black and white films showing Robinson in action like in the documentary shown this past March on PBS; “Jackie Robinson” by Ken Burns, Sarah Burns, and David McMahon.  The daring way he ran the bases, especially stealing home, is still exciting to me today.