Due to the current global COVID- 19 pandemic, I have been reluctant to post on my blog.  A blog post about baseball history seems very trivial when compared to the spread of the deadly virus that has at least for now changed our lives.  The voluntary and mandatory shelter in place and quarantines, recommended social distancing, and business shutdowns have been more than an inconvenience to everyone.  This is especially true for sports fans who have had to accept the cancellation of NCAA college basketball’s “March Madness”, the indefinite suspension of the both the NBA and NHL seasons, and the Masters Golf Tournament being postponed.  As for my favorite, baseball, the Major League Baseball season will not start until maybe June; if then.

However, I think a post about a milestone in baseball history would be a good change of pace from the constant serious life messages we are receiving about COVID-19 from MSNBC, CNN, FOX NEWS, and other media outlets.  The professional baseball historic milestone I am referring is the Centennial (100 years) Anniversary of organized Negro League professional baseball; the formation of the first Negro National League.

As the new decade of the 1920’s began, equality and justice for African Americans seemed an impossible dream.  African American soldiers returning from World War I battlefields did not receive a hero’s welcome, but instead a harsh slap of racial reality.  There were a number of African Americans lynched not only in the south, but throughout the country.  Racial violence prevailed in 1919 with deadly riots in East St. Louis, Tulsa, and Chicago.  This toxic national racial attitude spilled over into the sport of baseball, “the national pastime”.   Due to racial discrimination, African American and dark-skinned Latino baseball players were kept out of white professional baseball.

It is within this difficult racial environment that Andrew “Rube” Foster, African American team owner and manager of the Chicago American Giants birthed the Negro National League (NNL) on February 13, 1920 at the YMCA Building on 18th and The Paseo in Kansas City, Missouri.  The NNL has the distinction of being the first African American professional baseball league.

There had been a little more than a hand full of African American players in white professional baseball in the late 1880s.  However, by the beginning of the 20th Century, the racially discriminating “invisible color line” had been solidly formed.  In response to this, African Americans formed their own professional baseball teams.  The Cuban Giants, Cuban X Giants, Chicago Union Giants, Philadelphia Giants, and Pittsburgh Keystones were a few of the African American professional baseball teams at the dawning of the new century.  “Rube” Foster first gained fame as a star pitcher for the Philadelphia Giants.  Before 1920 there were a few Negro pro baseball leagues formed, but they either quickly folded or had no impact on the structure of black baseball.  However, the Negro National League (NNL) operated from 1920 – 1931.

The NNL consisted of eight teams its first year:  the Chicago American Giants, Kansas City Monarchs, Detroit Stars, St. Louis Giants, Chicago Giants, Dayton Marcos, Indianapolis ABCs, and Cuban Stars.  Due to the financial and racial obstacles African American pro baseball franchises faced, the league make up changed from season to season as some teams folded and new ones added.  Foster’s American Giants along with the Kansas City Monarchs, Detroit Stars, and the St. Louis Stars (new owners changed name from Giants to Stars in 1922) were the only teams in the league every NNL season.  At one time or another during its duration, the NNL showcased 14 members of the National Baseball Hall of Fame.  In addition, it is acknowledged as the successful forerunner and blueprint for the leagues formed that kept Negro League professional baseball alive before finally ending in the early 1960s; the Negro National League (1933 – 1948) and Negro American League (1937 – 1962).

Also, that ceremony included the unveiling of the Centennial Anniversary’s logo.

Once the 2020 Major League Baseball season hopefully begins, the centennial celebration will continue to be recognized.  During all MLB games, the Negro League 100th anniversary logo will be worn on the uniforms of all players, managers, coaches, and umpires.  Also, many clubs have planned centennial anniversary activities such as Negro Leagues tribute games with throwback uniforms, pregame panels with special guests, and game day giveaways.  The timing of these activities is now pending on the adjustments that will be made to the MLB season based on the COVID-19 pandemic. 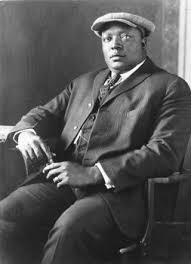 Calvert, Texas is located between Bryan/College Station and Waco, on State Highway 6. Travelling that route a few times, I remember that the main section of Calvert is slightly east of the highway. In this small town in the central part of the “Lone Star State, Andrew “Rube” Foster was born on September 17, 1879. Considered “the father” of Negro League baseball, Rube Foster is not given the credit deserved for his impact on professional baseball as a whole.

Foster’s success as a league organizer and team manager overshadowed an early career as a dominant pitcher. He was one of the best pitchers on first the Cuban X Giants and then the Philadelphia Giants, two of the best black baseball teams in the “dead ball” era of the early 20th Century.   Foster received the nickname “Rube” after defeating the Philadelphia A’s future Hall of Fame pitcher “Rube” Waddell in an exhibition game. He then went on to become owner and manager of the Chicago American Giants, one of the most successful black teams from 1911-1919.

In 1920, Foster formed the first official Negro professional baseball league, the Negro National League (NNL).  It was the fulfillment of his vision patterned after Major League baseball which at that period of time due to racism banned African American and dark-skinned Latino ball players. Prior to the NNL, several black leagues were organized, but none operated long enough to be historically significant.

“We are the ship, all else the sea”, is what Foster said to describe the NNL. He saw it as a ship travelling through the sea troubled by the stormy strong winds of racial segregation and discrimination.   Long term, Foster hoped the success of the NNL would highlight the talents of African American and Latino ball players; eventually leading to the breaking down of the racial barriers and integrating the Major Leagues.

The league structure Foster set up for black baseball continued despite his death in 1930. Through the racially oppressive 1920s, the worst economic depression in this country’s history during the 1930s, and the largest global military war in world history from 1939 – 1945; Negro League baseball survived. And just as Foster hoped, it gave African Americans and dark-skinned Latinos ball players the opportunity to professionally express their God-given talent; the opportunity not given them by white organized baseball.

Andrew “Rube” Foster was inducted into the National Baseball Hall of Fame in 1981.

Read more about the journey of Negro League baseball in my book “Last Train to Cooperstown: The 2006 Baseball Hall of Fame Inductees from the Negro League Baseball Era”. For more information, go to www.klmitchell.com or http://booklaunch.io/kevinlmitchell/last-train-to-cooperstown.