One way the cable sports networks are trying to help sports fans cope with the cancellation of professional and other sporting events due to the COVID- 19 pandemic is re-broadcasting key games and matches from previous years. While channel surfing I have seen replays from past “March Madness” NCAA men and women’s basketball championship games, Game Sevens of the NBA Playoffs, Super Bowls, Masters’ (golf) Championships, and World Series’ Game Sevens (my favorite).

Following their example, my blog posts during the 2020 Major League baseball season will be a baseball time capsule from the 1950s.  During that decade, the pace of integration in the Major Leagues slowly, but steadily went forward.  As a consequence, the talent pool for the Negro Leagues decreased setting it on a journey towards extinction by the early 1960s.  All of this with the early Civil Rights movement as a back drop.

This week’s post is about Henry Aaron and John Irvin Kennedy. 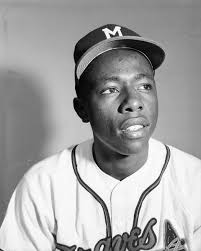 On April 23, 1954, 24 days before the United States Supreme Court’s May 17th decision that state laws establishing racial segregation in public schools are unconstitutional,  Milwaukee Braves’ rookie outfielder Henry Aaron hit his first Major League career home run.  Aaron hit a 6th inning solo 4-bagger off St. Louis Cardinals’ veteran right hand pitcher Vic Rashi at Busch Stadium in the Braves 14 inning 7 – 5 win.  He had also gotten his first Major League hit, a double, off Rashi in a game at Milwaukee’s County Stadium on April 15.  Rashi had come to the Cardinals after three 20 game winning seasons and six World Series championships with the New York Yankees (1946 – 1953).  Braves reserve catcher Charlie White, who played for the Philadelphia Stars in the Negro Leagues, hit his one and only home run of his two year Major League career in the Braves April 23rd victory.

Henry Aaron signed with the Braves in 1952 after leading the Negro American League in batting during his one month stint with the Indianapolis Clowns.  After one and a half seasons in the minor leagues, he moved into the Braves’ starting line up during spring training in 1954 when outfielder Bobby Thompson broke his ankle.  On April 13 at Cincinnati’s Crosley Field against the Redlegs, Aaron made his Major League debut going without a hit in five At Bats.

By September of his rookie season, despite suffering the ups and downs of a first year Major League player, he had batted .280 with 13 home runs and 59 RBIs.  However, his season ended on September 5th.  While sliding into third base after hitting a triple, his fourth hit of the game, Aaron broke his ankle.  He finished fourth in the Rookie of the Year voting behind winner Wally Moon of the Cardinals, Ernie Banks of the Chicago Cubs, and Braves’ teammate pitcher Gene Conley. 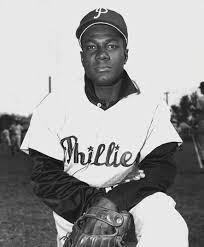 On April 22, 1957, John Kennedy became the first African American player to appear in a Major League baseball game wearing a Philadelphia Phillies’ uniform. He entered against the Brooklyn Dodgers as a pinch runner at Roosevelt Field in Jersey City, New Jersey where the Dodgers played eight games in 1957

John Irvin Kennedy wedged his Negro League baseball career between two attempts to play in the Major Leagues.  After college (Edward Waters College in Jacksonville, Florida), the slick fielding shortstop played two seasons in Canada on a team managed by former Negro League star Willie Wells.  Signed by the Major League’s New York Giants in 1953, Kennedy spent one season in the team’s minor league system before being released.  He spent the next three seasons in Negro League baseball; 1954 – 1955 with the Birmingham Black Barons and with the Kansas City Monarchs in 1956.

The talent level in the Negro Leagues had decreased by the mid-1950s, the best African American players were being signed by Major League teams.  After appearing in the All-Star Game while with the Monarchs, Kennedy got the attention of the Philadelphia Phillies who in 1957 were the only National League team without an African American player.  In the early stages of the Phillies 1957 spring training Kennedy made a big splash with his fielding skills.  He made the team as a reserve infielder, but hurt his throwing arm as the regular season began.

After his debut, Kennedy appeared in four other games and then the Phillies sent him to the minor leagues with an injured shoulder.  He finished the season hitting 19 home runs while playing at High Point-Thomasville in the Class B-level Carolina League.

John Kennedy spent the remainder of his career in the Phillies minor league system (1958 – 1961), never to play in another Major League game.

All pictures via Google Images

For my daily historical notices go to Kevin L. Mitchell@Lasttraintocoop