Do Not Overlook Harry “Suitcase” Simpson

Below is a re-post, of my 2016 birthday tribute to Harry “Suitcase” Simpson (“Why Harry “Suitcase” Simpson Has a Place in My Heart”).  I did acknowledge his birth date (December 3, 1925) two weeks ago on Twitter, but initially decided to not do a blog post.  However, after reading Douglass M. Branson’s book “Greatness in the Shadows:  Larry Doby and the Integration of the American League” (University of Nebraska Press – 2016) last month, I decided to give a birthday acknowledgement to Simpson on my blog again this year.  As my 2016 post indicates, he helped capture my passion for baseball 60 years (Yipes!) ago.  Yes, he does have a place in my heart.  But I also believe his role in the early racial integration of Major League baseball in the American League is overlooked, as it was in Branson’s book.

The premise of Branson’s writing is that the talent and accomplishments of Larry Doby, the first African-American to play baseball in the American League, is under-appreciated.  The author believes Doby’s career has been overshadowed by Jackie Robinson, the first African American to play in the Major Leagues, who made his debut nearly three months (April 14, 1947) before Doby’s (July 5, 1947).   The National League’s Rookie of the Year in 1947 and Most Valuable Player in 1949, Robinson played on six pennant winners and one World Series champion in his career with the Brooklyn Dodgers.  Doby had a career a little less spectacular.  The 1954 American League leader in home runs and RBI, Doby hit 253 career home runs, drove in a career 969 runs, and played on two pennant winners and one World Series champion with the Cleveland Indians.  He also overcame the same types of racial prejudice and discrimination chronicled in the many books, written articles, and even movies about Robinson; but without given the same admiration.  Branson also stated the American League domination by the New York Yankees from 1947 – 1958 with first Joe DiMaggio and then Mickey Mantle playing centerfield also overshadowed the career of Larry Doby.

While I overall agree with his book’s premise, Brannon failed in one regard.  In mentioning the few other African-American ball players who were Doby’s teammates or opponents during the early period of racial integration in the American League, the author omitted Harry Simpson.

With Simpson and Larry Doby in the outfield, and Luke Easter at first base, the Cleveland Indians were the only American League team to have African-Americans as part of its everyday lineup in 1951 – 1953.  In 1950, the season before Simpson’s rookie year, only three African-American or dark-skinned Hispanics played in the American League; Doby, Easter, and the Chicago White Sox’s Minnie Minoso.   After leaving the Indians, Simpson went on to play with the Kansas City A’s and the New York Yankees.  How could Brannon discuss Doby and the racial integration of the American League, but not mention Harry Simpson?  His name is not indexed anywhere in Brannon’s book.  Although not as prominent as Larry Doby, Minnie Minoso, or Elton Howard, Simpson’s role in adding color to the face of the American League in my opinion is overlooked.  And surely, as my following re-post explains, he helped to hook a five year-old kid to what would become an everlasting love for baseball.  Enjoy my re-post

Harry Simpson was one of the first baseball players that captured my attention as I became a young fan of the nation’s “favorite past time” in the 1950’s.  I learned about great players like Ernie Banks, Willie Mays, Henry Aaron, and Mickey Mantle when I was a six year old becoming aware of the game.   But “Suitcase” Simpson, as my brother called him, was one player that really drew my interest.

Born on December 3, 1925 in Atlanta, Georgia; the left-handed batting Harry Leon Simpson was an outfielder/ first baseman who after serving in the military during World War II initially played professionally in Negro League baseball with the Philadelphia Stars.  Signing his first Major League contract with the Cleveland Indians in 1948, Simpson became one of eight former Negro League players who made their Major League debuts in 1951.  The others were Bob Boyd and Sam Hairston (Chicago White Sox), Sam Jones (Cleveland Indians), Luis Angel Marquez (Boston Braves), Willie Mays,  Ray Noble, and Arte Wilson (New York Giants).  A good fielder with a strong throwing arm, Simpson hit with power in the minor leagues (31 home runs in 1949, 33 in 1950).  The Indians had high expectations for him.   With Simpson and Larry Doby in the outfield, and Luke Easter at first base, it was the only American League team to have African-Americans as part of its everyday lineup in 1951 – 1953. 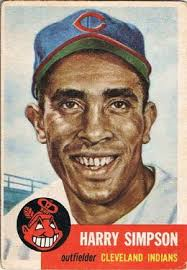 Following two injury plagued disappointing seasons with the Indians,   Simpson’s contract was purchased in May of 1955 by the Kansas City A’s; my hometown team.  He had his best seasons in the Major Leagues with the A’s (1955 – 1957) and that is when I became familiar with him.  I had never seen anyone with such thick eye brows and pointed ears.   He hit .293 in 1956 with twenty-one home runs and 103 runs batted in and was one of two African-Americans on the American League’s All-Star Game squad; Vic Power his teammate from the A’s was the other. 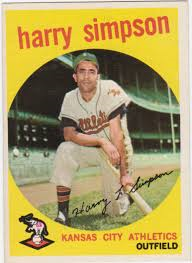 Contrary to the assumption that could be made in reviewing Simpson’s baseball career, he got tagged with the nickname “Suitcase” while in Negro League baseball.  It did not come from him being traded or changing teams six times in his eight year Major League career.  Simpson already had the nickname when he came to the A’s in 1956; only his second Major League team.  Because of his size 13 feet, he was nicknamed while with the Philadelphia Stars after the Toonerville Trolley comic strip character “Suitcase Simpson” who had feet the other characters said; “were large as suitcases”.  I remember Simpson’s eye brows and ears, but I do not recall his large feet.

To my sorrow, the A’s traded Simpson to the New York Yankees in June of 1957, but the Yankees traded him back the following summer.  In 1959, he split playing time with three teams; Kansas City A’s, Chicago White Sox, and Pittsburgh Pirates.  After being released by the White Sox before the 1960 season, Simpson played in the minor leagues and in the Mexican League before retiring in 1964.

Harry “Suitcase” Simpson, a part of that early group of African-Americans to integrate professional baseball in the American League during the 1950s, will always have a place in my heart.  Although not a Hall of Fame player, Simpson helped to capture the passion of a six-year-old kid for the game; a passion that has lasted 59 years.