King Solomon “Sol” White wrote about the plight of the late 19th Century and early 20th Century African-American professional baseball player, of which he himself experienced.  Born June 12, 1868 in Bellaire, Ohio, White played with teams in the minor league system of white professional baseball in the 1880s.  In the 1890s when the color line became solidified banning African-American and dark-skinned Hispanics, he then played with a number of the best Negro baseball teams and later the co-owner/manager of the Philadelphia Giants, one of the best black teams of the early 1900s.  His book written in 1907, “History of Colored Baseball”, gives a picture of obstacles he and other African-American professional baseball players faced as the game began its journey to become “the National Pastime”.

“In 1890 Sol White played for the Monarchs of York,

attracted many of the players from the previous year’s Cuban

Giants. Failing in their attempt to get higher salaries from the

Giants’ owner, John M. Bright, the players were easily lured away by

the money that Kreiter offered. The Monarchs represented the city

of York in the Eastern Interstate League. It would be one of the last

breaks in the color line.

White played briefly in 1895 with Fort Wayne, Indiana of the

Western Interstate League. It would be the last time he played on an

integrated team. As the 1890s came to a close there were no black

players in organized white baseball. The ‘invisible color line” had

been set and would stay intact for over 40 years.

With the door to Major League professional baseball closed for

African-American players, Sol White continued his career in the

early beginnings. They were African-American teams that played

small town white semi‐pro teams, other black teams, and anyone

that wanted to play them. No official Negro League existed at that

Chicago Columbia Giants in 1900. All of which were top African

American professional teams of that period.

Schlichter to start a new black team, the Philadelphia Giants. As co-owner,

team manager, and one of the team’ top players, White

century’ first ten years. Some of the best black players of that time 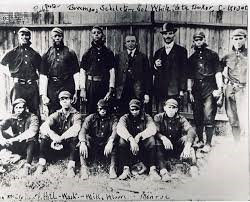 Philadelphia Giants (Sol White fifth from left on back row)