John L. Gray and Haley Young, Jr. both played baseball one season with the Indianapolis Clowns during the final years of the Negro League baseball era.   Last month on April 7, I was the main speaker (“Negro League Baseball: The Deep Roots of African-Americans in America’s Great Game”) at a tribute given to both players at the Old Dillard Museum in Fort Lauderdale, Florida. (See pictures under the “Events” tab above)

The museum is located in the building that housed the first school for African-Americans students in Fort Lauderdale, named “The Colored School” and later Dillard High School. An important educational and cultural center for African-Americans in Fort Lauderdale, the Old Dillard Museum serves as a constant reminder of the community’s proud and rich heritage.

Both Gray (1955) and Young (1957) were graduates of Dillard High School,  As part of their tribute that evening, they became the first baseball players added to the museum’s Sports Wall of Fame which is for alumni of the school. 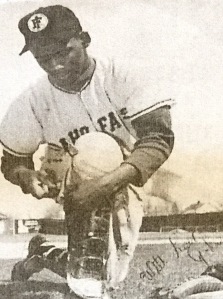 Gray attended Central State College in Wilberforce, Ohio and then signed with the Cleveland Indians in 1956 as a catcher and outfielder. Jackie Robinson had erased the “invisible color line” to begin the racial integration of Major League baseball nine years earlier in 1947, but attitudes of prejudice and discrimination still existed.  The Detroit Tigers, Boston Red Sox, and Philadelphia Phillies still had no African-American or dark-skinned Hispanic players on their Major League rosters the year Gray signed.  He played that first year with the Indians’ Class D minor league affiliate the Daytona Beach Islanders (Florida State League).  In 1958 after some dissatisfaction with the Indian’s minor league system, Gray signed with the Indianapolis Clowns of the Negro American League (NAL).  By then, Negro League baseball had declined since its peak in the 1940s due to losing its best players and fan base due to the racial integration of the Major Leagues.  While with the Clowns, Gray hit a home run at Yankee Stadium which he frequently mentioned to his children and grandchildren in his golden years.  In 1959, he went back into the Major League system signing with the Chicago Cubs.  He played with the team’s Class D affiliate, the Paris (Illinois) Lakers, in the Midwest League.  The next season Gray signed with the Chicago White Sox and played with its Class C minor league affiliate the Idaho Falls Russets in the Pioneer League.  Reaching his frustration limit with the unfair treatment and broken agreements he encountered with Major League teams, Gray did not return to professional the next season. 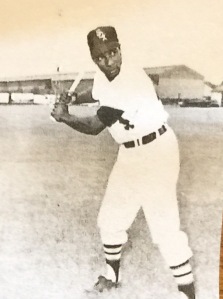 After graduating from high school, Haley Young, Jr. signed with the Philadelphia Phillies. Being only 16 years old, he played shortstop and outfield in the Class D Appalachian League for the team’s Johnson City, Tennessee affiliate.  In 1958, he seriously damaged his knee and did not fully recover until 1961 when he signed with the Indianapolis Clowns.  The Chicago White Sox signed Young in 1962, but he got no further than the team’s Class A minor league level.  He led his Clinton, Iowa (Class A – Midwest League) team in home runs (16) and RBI (51) while batting .254 in 1965, but it got him no closer to getting on the White Sox’s Major League roster even though the team needed power hitters.  From the 1965 through 1967 seasons, only four White Sox players hit more than the 16 home runs Young smashed in 1965.  The White Sox were in the American League where the promotion of African-American players had been less aggressive than in the National League since the days of Jackie Robinson.  After the 1966 and 1967 seasons with the White Sox’s Class A minor league affiliate in Lynchburg (VA.), Young played in Canada’s independent league in 1968 and retired from baseball in 1970.

I want to thank More Than a Game, Inc. (Danny Phillips) and the Old Dillard Museum (Derrick Davis) for inviting me to be a part of the memorable event for Haley Young, Jr. and John L. Gray. The honorees were not there to receive their accolades; Haley Young died in 2015 and John L. Gray too sick to attend.  Sadly, last week he too passed away.  However, their achievements in baseball are honored on the Old Dillard Museum’s Wall of Fame. They were in the group of unsung African-American pioneers that stood up against racism and prejudice to integrate minor league professional baseball during the Civil Rights era.