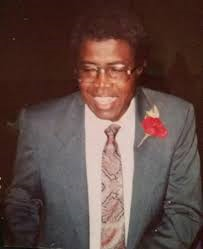 A well-respected educator and coach (football, track and field) in the Orange, Texas school system, Breedlove died earlier this month.  Loved by parents and former students in the community, he was honored on last September 23 when the West Orange-Stark High School football field became the Leroy D. Breedlove Field.  More on the life of Breedlove can be read using the link to an article from the Orange Leader at the end of this post.  As mentioned in the article, before his career as an educator, Breedlove played with the Kansas City Monarchs.

Born in Muskogee, Oklahoma, Breedlove moved to my hometown of Kansas City, Kansas while in grade school.  Like most of the African-American kids on the city’s northeast side, including me, he attended Sumner High School participating in all sports.  Breedlove  graduated in 1949, a classmate of my uncle and aunt.  I went to high school with his nephews.  After graduating, Breedlove received an athletic scholarship to Texas Southern, named Texas State University for Negros at that time.  He played football, basketball, baseball, and ran track.

It would be after his freshman year when Breedlove, a pitcher, played with the Kansas City Monarchs.  In 1950, African-American professional baseball players faced a time of both slow change and faster decline.  The racial integration of Major League had started its initial slow process that would increase by mid-decade.  However, Negro League baseball had begun a faster demise its eventual end in the early 1960s. Pitcher Satchel Paige and shortstop Ernie Banks, both in the Baseball Hall of Fame, played with the Monarchs in 1950.  Pitcher Connie Johnson and infielder Curt Roberts, who would both play on Major League teams in the 1950s, were also Monarch teammates of Breedlove.

After that one season,  Breedlove returned to Texas Southern and upon graduation in 1954 began his teaching/coaching career.