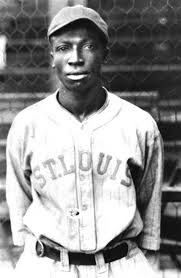 Many of the stories describing Bell’s speed were exaggerations (“He turned off the light switch and he got in the bed before the lights went off”). But; clocked at 12 seconds circling all the bases, he is considered one of the fastest runners in all baseball history.

Bell started his playing career as a pitcher. His manager called him “Cool Papa” because he kept his composure during pressure situations on the mound.  The nickname stayed with Bell even though he hurt his pitching arm and played outfield the rest of his career.

From 1922 – 1931 he played for the St. Louis Stars. He teamed with fellow members of the Hall of Fame shortstop Willie Wells and first baseman George “Mules” Suttles to help the team win three National Negro League championships (1928, 1930 – 1931).

While in his 30’s, Bell wore the uniform of the Pittsburgh Crawfords (1933 – 1938); one of the best teams assembled in Negro League history.  Hall of Fame players Oscar Charleston, Satchel Paige, Josh Gibson, Judy Johnson, and Jud Wilson were teammates of Bell at times during this period.  The Crawfords were National Negro League champions in 1935.

Still playing while in his 40’s, Bell helped the Homestead Grays win Negro League World Series championships in 1943 and 1944.