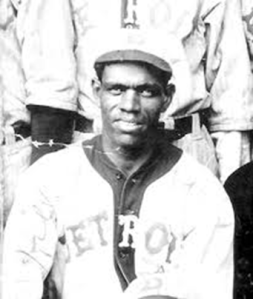 Today is the birth date of Negro League baseball player John Preston “Pete” Hill; born on October 12, around 1882 or 1884 in Virginia (Culpeper County).

The following is an excerpt from my book, Last Train to Cooperstown:  The 2006 Baseball Hall of Fame Inductees from the Negro League Baseball Era, which profiles the Hall of Fame outfielder:

“A star in Negro League baseball during the first quarter of the 20thCentury, Pete Hill was called the black Ty Cobb. Major League owners and executives futilely denied that it was not racism that kept African-Americans like Hill and others out of white organized baseball during that time. This implied that black players did not have the skills and abilities for big league baseball, which was not true and why the “color line” that kept black players out was invisible. If it were true, Negro League players would not have been compared to the Major League ones as they commonly were before the “color line” was erased. John Henry “Pop” Lloyd, one of the best pre‐1920 players in Negro League baseball, was referred to as the “black” Honus Wagner; his contemporary at shortstop that played for the Pittsburgh Pirates (1900 –1917)and was inducted into the Baseball Hall of Fame in 1939. Pete Hill’ accomplishments on the field were compared to Ty Cobb; who in his Major League career (1905 ‐ 1928) hit over .400 three times, finished with a .366 career batting average, and was also inducted into the Baseball Hall of Fame in 1939. It is a comparison painted by racism, but it gives an indication of Hill’ talents as a ballplayer. As Cobb was making life miserable for opposing American League pitchers, Pete Hill was the hitting superstar on three pre‐1920 era premier African American teams.”

“At 6” 1”, 215 lbs., Hill was a left-handed line drive hitter that was hard to defend because he hit the ball to all fields. A contact hitter that seldom swung and missed, he was a “tough out” for right handed and left-handed pitchers. Cum Posey, the long‐time owner of Negro League baseball’ Homestead Grays called Pete Hill, “he most consistent hitter of his time.” Negro League first baseman Ben Taylor who played on teams that were opponents of Hill called him “one of the most dangerous hitters a pitcher could ever face in a tough situation.” A 1910 article in the African-American Chicago Defender newspaper stated, “ete Hill would be a star in the Major Leagues if he were white. He can do anything a white player can do. He can hit, run, throw, and is what can be termed a wise, heady ballplayer.”

To learn more about Pete Hill who was one of best hitters in baseball history, read Last Train to Cooperstown:  The 2006 Baseball Hall of Fame Inductees from the Negro League Baseball Era”.    http://booklaunch.io/kevinlmitchell/last-train-to-cooperstown.