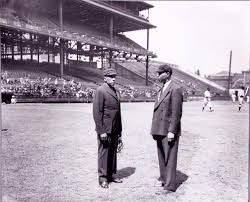 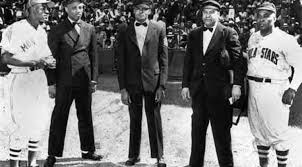 “Strike Three, you are out”! Umpires are an essential but underplayed part of a baseball game.  Most of the time they do their job correctly and leave the outcome of the game to the skill level of the players, as it should be.  However, like all humans, umpires make mistakes.  Occasionally an umpire’s judgement on a close play will cause a controversy, but it is seen as just a part of baseball’s overall nature as a sport.  On a close play, Jackie Robinson of the Brooklyn Dodgers stole home in Game one of the 1955 World Series against the New York Yankees.  The argument between the home plate umpire and Yankee catcher Yogi Berra is a classic cut of baseball film history.  Berra, until his death earlier this year, continued to say Robinson was out.

Umpires were also an essential part of Negro League baseball. Last week marked the birthday of former Negro League umpire Percy Reed.  Born on May 10, 1910 in Mobile, Alabama; Reed lived most of his life in Cincinnati, Ohio where he became the main Negro League umpire for the “Queen City”.  From 1935 – 1937 he called games of the Cincinnati Tigers, one of the city’s most renowned black teams.  The Tigers were a charter team of the Negro American League (NAL) in 1937.  When the Tigers folded, Reed went on to be the major baseball arbitrator for Negro League baseball games in the city until 1947.  He worked contest played by Josh Gibson, Satchel Paige, Buck Leonard, and other great Negro League stars.

Due to the racial prejudice that existed in professional baseball in the early 1900s, there were only a handful of professional black umpires. By most accounts, the Negro National League (NNL) founder Andrew “Rube” Foster used only white umpires for league games during the first two years of operation (1920 and 1921) before hiring black umpires W.W. “Billy” Donaldson and Bert Gholston.  Both Donaldson and Gholston had long, distinguished careers in Negro League baseball stretching into the 1930s and 1940s which included umpiring Negro League World Series and East West All Star Games.

The responsibility for providing umpires for league games shifted to the home team beginning in the 1930s. This led to a period of inconsistency in the quality of umpiring in Negro League baseball. Visiting teams complained the umpires’ calls were tilted in favor of the home team.  Some players were not hesitant to voice their displeasure to an umpire’s decision in which they disagreed.  After disputing a call while playing with the Philadelphia Stars, third baseman Jud Wilson hit an umpire during the 1934 Negro Championship Series.  A few years later, Wilson went after an umpire with a bat in the locker room at the end of a game.  As teammates restrained Wilson, police got the umpire out of the room safely.

Although the actions of Jud Wilson with his legendary temper were extreme examples, player clashes with umpires surfaced as a problem many times in the Negro Leagues during this period. Due to a lack of support and authority given from league officials, umpires were reluctant to eject players or managers from games.  It became so bad at times it is said some umpires carried concealed weapons for protection.

By the late 1930s league officials helped curb the problem by making stronger efforts to support their umpires and discipline players.  Also, former Negro League players who still had the respect of those still active in the leagues began umpiring.   Hall of Famers Oscar Charleston (1976) and Wilber “Bullet” Rogan (1998), Frank Duncan, Crush Holloway, and others were umpires for Negro League games after retiring.  However, there is still the supposed story of former Kansas City Monarch Harly McNair pulling a knife on players who threatened him with bats after umpiring a game.

Bob Motley, a Negro League umpire in the late 1940s and the 1950s went on to call games in the Pacific Coast League (PCL) in 1959. During that time Emmitt Ashford was also umpiring in that league.  In 1966, Ashford became the first African American Major League umpire.

To learn more about the history of Negro League baseball, read “Last Train to Cooperstown:  The 2006 Baseball Hall of Fame Inductees from the Negro League Baseball Era”.  (http://booklaunch.io/kevinlmitchell/last-train-to-cooperstown)