Both Raydell Maddix and Henry Presswood played Negro League baseball after the “invisible color line” was broken and Major League teams began signing African Americans.  Maddix and Presswood were opponents and teammates of Negro League players that went on to play in the Major Leagues.  However, neither of the two went beyond playing in the Negro Leagues.

A left handed pitcher who was born in Tampa, Florida on October 7, 1928, Raydell Maddix played for the Indianapolis Clowns from 1947 – 1953. Like most Negro League players in the late 1940s and in the 1950s, he was hoping to catch the eye of Major League scouts. His teammate, Sam Hairston, was signed by the Chicago White Sox in 1950. However, military service interrupted Maddix’s career for two years; 1951 and 1952.

A power pitcher nicknamed “Lefty Bo”, Maddix twice lead the Negro American League in strikeouts; 1948 and 1949.   He pitched against Willie Mays, Ernie Banks, Elston Howard, Jim “Junior” Gilliam and others who went on to play in the Major Leagues. However, Maddix at times was inconsistent with the   command of his pitches and walked batters. He had potential, but integration at that time had not progressed to the point that many Major League teams were willing to invest the time and money on developing African American players; especially pitchers. 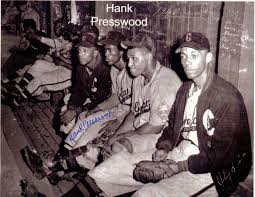 Henry “Hank” Presswood was born on October 7, 1921 in Electric Mills, Mississippi. A light hitting infielder, his five year Negro League career ran parallel to that of Raydell Maddix.  After coming out of the military in 1947, Presswood played with the Cleveland Buckeyes from 1948 – 1950.  His 1948 Buckeye teammates Sam Jethroe, Sam Jones, and Al Smith went on to play in the Major Leagues.  Presswood finished his Negro League career playing for the Kansas City Monarchs from 1951 – 1952.   Ernie Banks was his teammate.

Read more about the journey of Negro League baseball in my book “Last Train to Cooperstown: The 2006 Baseball Hall of Fame Inductees from the Negro League Baseball Era”. For more information, go to www.klmitchell.com or http://booklaunch.io/kevinlmitchell/last-train-to-cooperstown